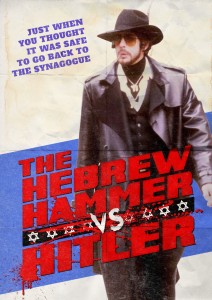 Nearly 10 years after the cult classic Hebrew Hammer exploded onto screens around the world, the controversial sequel is now set to be made next year.

“The ascendency of Mordechai Jefferson Carver was never inteneded to be told in one movie. Not even two. More like eighteen … but two is a good start,” he said.

When a time-traveling Hitler gets his hands on Time Sukkah technology that enables him to un-inscribe the Jewish people from the ‘Book of Life’, it’s up to the Hammer and Mohammad Ali Paula Abdul Rahim to follow Hitler through Jewish history to rewrite his wrongs.

On securing the rights to the movie that will mean it will be made, Kesselman said: “I always saw the Hebrew Hammer as a franchise. I never felt the original was handled properly in its distribution and the unwavering fan support over the last 10 years has prompted me to give the world what has desperately, even pathetically, groveled for. For G-d’s sake world, get off your damned knees already!?”

After a near-decade tug-of-war over the rights to the sequel and many attempts to getting it made, Kesselman finally secured the rights and the movie is now on track to being made next year, with filming due to begin in May 2013. The Jewxploitation franchise, premised on the Blaxploitation films, is to push racial and cultural buttons and the Hebrew Hammer made a significant impact on Jewish culture, embracing Jewish empowerment and street-Shabbat Shalom savvy.

In the new film, the Hebrew Hammer is now married and enjoying the good life in suburbia. But the Hammer is forced to dust off his pimpy, black leather couture to confront a new menace: A time-traveling Hitler, intent on altering key moments in Jewish history, to the detriment of the Jews.

Kesselman negotiated for the rights of the sequel with John Schmidt at ContentFilm. The new movie, like the first movie, will make an indelible mark on Jewish culture and will be made for $1-2million. A funding campaign for it is underway and contributions from investors are being negotiated.

The original film, which was made for $1.3million, premiered at Sundance and had a limited theatrical release. Comedy Central paid $0.5million for TV rights for 5 years and it was seen by millions on TV in the United States and was broadcast in 13 foreign territories, distributed by Strand Releasing.  In the original movie, the “Hebrew Hammer”, played by Adam Goldberg, is on a mission to rescue Hanukkah after Santa Claus’s son, played by Andy Dick, takes control of it.

Vanity Fair, Boston Globe, and Time Magazine have all chosen it for their favorite holiday movie lists.

Richard Kind wants YOU to pledge!

The Hebrew Hammer will strike again